Kutch is a place of artsy wonders. The streets are filled with awe-inspiring talents. One only needs a single look to fall in love with the place, people, and art. Here the whole of the villages are dedicated to their crafts, for example, Gundiyali is dedicated to pottery, Ajrakhpur is dedicated to Ajrak, Nirona to Rogan art, Mandhvi to bandhani, Garada, Banni and Pachham, Mundra, Vagad to Embroidery, etc.

One of the legends says, that Karan from the Mahabharata guided some cattle breeders, Kathi to ancient Gujarat. Those people with some of their finest needlework laid down the foundation of Kutch embroidery. The history of Kutch embroidery is not a straight line but an intricate web that is as rich and exquisite as the embroidery itself.

In the 16th or 17th century, Meghvals and Islamic nomads migrated from Samroti, southern Sindh east of Indus River to the Banni-Pachham. They brought their families, herds, culture, and tradition. In this way, the Pakko style was introduced to the Kutch people. In the other region of Kutch, for eg, Garada Pakko, as well as Khaarek, was brought in by the Rajput brides as their dowries from Sindh.

The counted style of Suf and Khaarek made their way to Kutch by the Sindhi refugees in 1972 but initially, these styles were limited to Dhat, eastern of Sindh. Haramji and Muko the former is interlaced style while the latter is metallic embroidery both were brought in from Central Sindh.

Zardozi an ancient Persian craft that uses threads of Gold and Silver wore by the Jadeja rulers of Kutch was brought to India by the Mughals. During the third rein of the Jadeja rules in Kutch, (1875-1942) Maharao Khengarji  III called the Mochis, to display their finest needlework Aari on Gaji imported silk from China.

Artists and their legacy The region of Kutch can be divided into four sub-regions on the basis of their embroidery style: Banni and Pachham in the north, Garada in the west, the heart of Kutch, from north of Bhuj east to Bhachau and south to Mandvi and Mundra, and Vagad in the east.

Banni and Pachham: the Northern Region, and Garada: the Western region

These regions have an intricate pattern of embroidery. It could be said that these regions have it all from Paako to Khaarek to the Suf embroidery. Nen and Khambir are also practiced here and are particular to Banni-Pachham and associated with Khaarek embroidery. Bavaliyo with the blocks of haramji alternating with mirrors are used as borders throughout Kutch. Reflecting the history of Islamic origin the embroidery Zardozi was used for the tombs of pirs aka Muslim saints, along with aabha aka tunics of urban Muslim communities, courts, etc.

The Heart of Kutch: Central and South

In Kutch, there are three Rabari subgroups: Dhebarias in central Kutch, Vagadias in Vagad, and Kachhis in Garada. It is famous for mirror work. The outer boundary is usually done using yellow color thread in chain stitches. Afterward, the rest of the design is with regular sequences of mirrors and threads. Rabaris also use decorative back-stitching, called bakhiya, to decorate the seams of women’s blouses and men’s kediya/jackets.

It uses minute renditions of local styles: Paako, Khaarek, Haramji, Khudisebha, and Jat work. Although the name given to them might vary from region to region for eg, Haramji is called ‘tun’, which means darning, or harna. Specific patterns of each style like elongated hooked forms and fine white back-stitch outlining in Paako, and an all-over grid in Haramji, are also exclusive to Mutava work. Mutava style is uniformly fine and geometric, and orange stitching predominates.

Jat community are said to be migrants from Persia through Baluchistan and are in Kutch since the 12th -13th centuries. Hence their embroidery has a touch of Baluchistan in it. Garasia Jats uses tiny cross stitch patterns embedded with minute mirrors to cover the entire background of the fabric. This kind of style is exceptional to Kutch and Sindh. The main article embroidered by them was Churi, the yoke for the female attire. The color palette of Jat is quite similar to that of Paako, this indicates that they might combine Paako with their own designs with that it can also be concluded their links with Samtori.  Daneta and Fakirani Jats still have something in common with regard to embroidery. The design is characterized by tiny bars of kharkiyala tight padded satin stitch and radiating circles of a couched stitch.

The Vagad embroidery style is shaped by the availability of different kinds of materials common to Banaskantha and Saurashtra. Here the materials used are quite different from other regions, for eg, rough khadi cloth, thick hir/floss silk, and loosely plied cotton thread. The designs are large-scale chain and herringbone stitches, and large, bold, hand-drawn motifs. 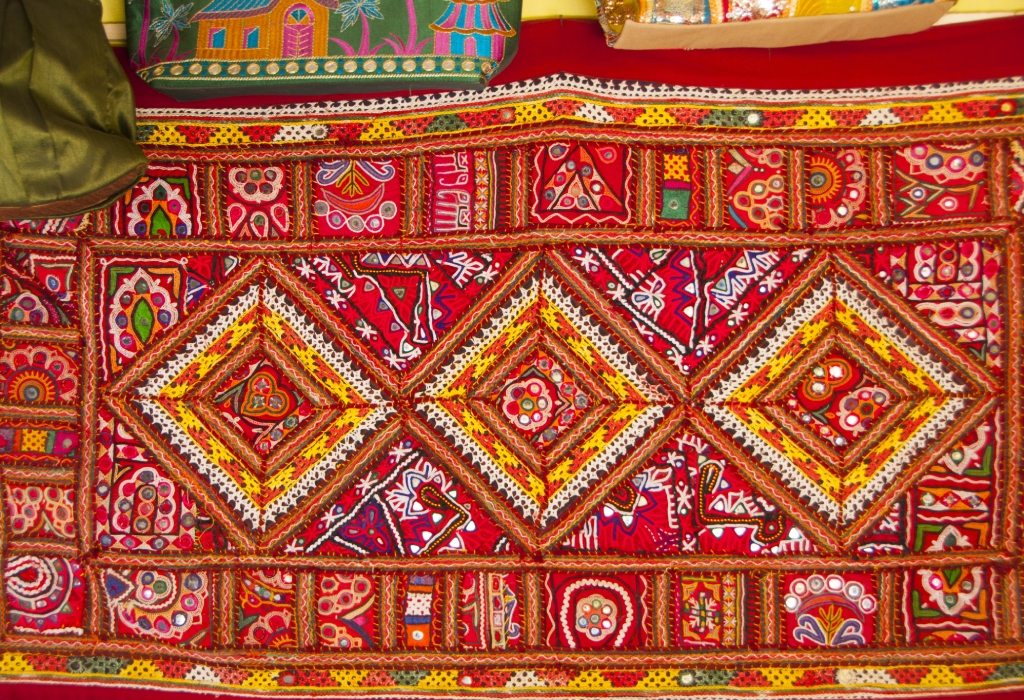 It is a tight square chain and double buttonhole stitch embroidery. It is often accompanied by black slanted satin stitch outlining. The artisans usually use white thread for details. In Paako the floral motifs are sketched in the mud with needles but the Paako designs are more inclined towards geometric logic. Detached Romanian or chain stitches, buttonhole, and running stitches outline mirrors or flowers. Most of the time the background for Paako is red in color and the thread colors are also prescribed. For eg, the black outline patterns are sometimes followed by a white outline in newer embroideries. The floral motifs are white and red and the other motifs are worked in red-indigo and green-gold patterns etc.

It is composed of short bands of satin stitching. Most of the time, in Khareek, the entire background, which is usually red in color is covered with geometric patterns. Green and red or pink dominates another kind of thread. Blue and golden yellow are used for compliments. In the famous patterns, the combination of green and deep magenta with blue and red is favored while the golden yellow was used at pattern centers.

It is based on the triangle, called Suf. In Suf, the motifs of surface satin stitch are worked from the back of the fabric. The patterns are used in the arrangement of square blocks or triangular pyramids. The thread used is invariably green on a red background, or red on an off-white background. The other color for eg, Gold or yellow, purple or indigo, white and deep magenta, etc were used as complimentary colors.

Detailing is an inseparable part of Suf embroidery.

Ahir embroidery was practiced by Ahir people who migrated from Mathura and settled in the northwestern part of Gujarat including Kutch. This kind of Embroidery combines geometric patterns, herringbone, and interlaced stitches of the Kathi work of their ancestors with local motifs. Rajput work employs blocks of interlacing and profuse mirrors, recalling their Sindhi origins.

As time passes by and development occurs it is impossible that art stays the same. In the 1960s, the commercialization of craft traditions began in Kutch.

In 1995, the Nath, a group of Dhebaria elder men, banned the making and using of traditional hand embroidery as they deemed it ‘too expensive. This resulted in an unexpected gain. Dhebaria women folk walking the tight rope began to use sewing machines to apply ribbons and trims for embellishment. Hence Harijari, the new Dhebaria art, was born.

Suf and khareek embroiderers choose a different path. They reduced the production numbers but increased the creativity level. The precious, delicate work was deemed for home decoration that would be framed or reserved for days of festivities.

The Paako and Ahir artisans used a combination of these strategies, limiting their repertoires and combining hand and ribbon trim work.

The motifs in the Paako embroidery are inspired by the ripple pattern created during summer in the desert as well as in water. It is known as Lor or Ler. Gingri and Rano band were also used. Ler and Gingri had now disappeared. Rano bandh was very popular in recently embroidered pieces.

Nearly 30-35 yrs ago the embroidery in trend was Neran/ Nen embroidery and Pakko was seldom used. But now Neran/Nen is almost forgotten and the trend of practicing Pakko and Mukko embroidery is persistent. At present the floral motifs are predominant.

In the last three decades, the Mutwa community has added a motif known as Dhoran in embroidery. A motif created by mirrors in a circular arrangement called Dhungo was highly popular amongst Paratharia- Ahir for the past 20 yrs. But now it is not used as the Ahirs have stopped practicing embroidery.

After the earthquake of 2001, many artists suffered. There was a major loss of heritage and its impact could still be seen. But due to timely help from govt, The revival of handicrafts of Gujarat in general and the Kutch district in particular, NGOs The Sri Kutch Kalyan Trust at Sodha Camp at Zhurah the situation has stabilized over the years.

There are many active NGO’s that are there to help these artists and to preserve our heritage. For eg, Shrujan: Threads of life. It is a non-profitable organization that helps in the preservation of Kutch heritage and art. The founder is Chandaben who in 1969 took the first step that revolutionized the life of Kutch women forever. She single-handedly marched to an exhibition in Mumbai and presented the embroidered sarees by the Kutch women and the rest is history. The book titled- Embroidery of the Ahirs is also published by Shrujan. It is the first book in the series called Under the Embroidered Sky. The rest of the books will tell the story of all of the nine clans of Ahirs.

There is also LLCD- the living and learning design center that acts as a living museum. Here the pieces displayed are created by the artists that are still living. The collections kept changing as new artifacts are added by them.

Due to the rapid increase in technology and rising demand for Kutch fabrics in the market income of the artists has indeed increased to a certain extent. But as we know that every coin has two faces, here the ugly side has also surfaced repetition and loss of hands stitched work. Given a choice between when you have to work for hours to produce a single piece of embroidery or to work with a machine to produce say ten articles at the same time what would you choose? The answer is a no-brainer. The artists are also people who have to put food on the table for their families. When you can sell ten items and make more money, so why not!

It is said that they boasted to never embroider a pattern twice i.e in their lifetime they would never make two similar designs. They would draw inspiration from their surroundings and would create magic with their threads. They would teach their daughter the basics but never actually give instructions on how to make her piece that is only for the daughter to design. It would be her very own unique creation. But now this beautiful tradition is no longer there.

We here have a win-win solution for everyone. You can buy your favorite embroideries to your heart’s content at the Clio heritage store. In this way, you will also be helping the artists and their art to grow and keep flourishing.

All images belong to their respective owners.

Product That Speaks Its Story